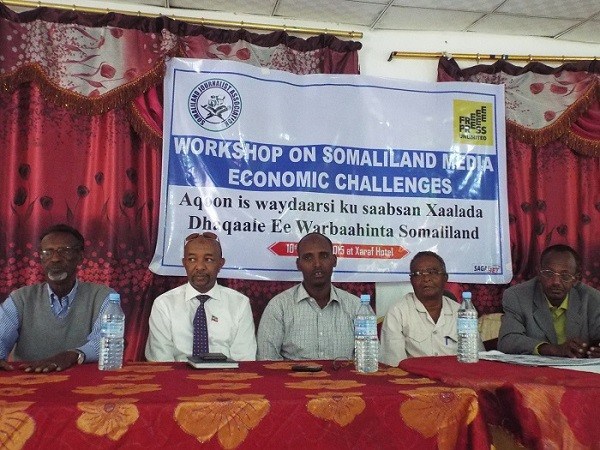 The workshop jointly organized by SOLJA and Free Press, held at Haraf Restaurant in Hargeisa on Tuesday under the theme “overcoming the brown envelope syndrome in daily news coverage” brought together over 40 journalists from the different media fraternities in the country to discuss how best to overcome the economic challenges facing the country’s media.

He also stressed on the importance of maintaining a high standard of journalism and adopting correct practices including balance, objectivity, integrity and, most of all, accuracy.

In his opening speech, Mr. Mohamed Elmi Adam, the Director General of Somaliland’s Ministry of Information and National Guidance expressed his gratitude towards Somaliland Journalists Association (SOLJA) and Free Press for conducting this valuable workshop.

He talked lengthily about the role of SOLJA in empowering and bringing together Somaliland journalist.

The lead facilitator of the workshop Hamse A. Khaire

During his presentation, Hamse also pointed out that Journalism as a profession is faced by a lot of challenges in Somaliland including poor quality of journalism training, absence of effective media act, lack of specialization; as most of journalists work on a diversity of issues, blames for distortion, limited knowledge of development issues and poor salaries.

Mr. Burmad shed light on brown envelope dilemma where he stated that the practice of journalists accepting money from news sources, especially politicians, in order to ‘facilitate’ their stories has become rather common in Somaliland media.

He stressed that some of the journalists defend the habit, saying that media owners subject them to poverty wages and exploitative working conditions, leaving them little choice but to rely on politicians’ and other corporate handouts for their daily survival.

Since the incumbent SOLJA leadership came to office six months ago, the organization took big strides in educating and advocating Somaliland journalists. Similarly, the flurry of arrests reduced during this period due to greater interaction and negotiation with authorities.

Somaliland Journalist Association –SOLJA was established in 2003 with the purpose of “Defend and Promote” the rights of the media in the country.

SOLJA which aspires to ensure that the local Media realizes its capacity in executing its activities within its ethical norms hence exercise freedom of expression in a fearless atmosphere is indebted to its main sponsor the National Endowment for Democracy-NED and others for supporting its Mission of Empowering Somaliland media in its field of expertise hence safeguard its professional rights to Guarantee ethical journalist.