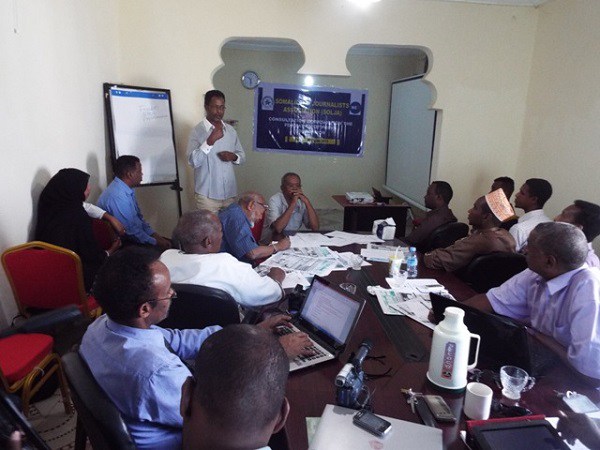 Hargeisa, (SOLJA) -Somaliland Journalists Association (SOLJA) has held a consultation meeting with the country’s veteran and young journalists to discuss the creation of Media Ethics Commission and the completion of media

The meeting held inside SOLJA headquarters in Hargeisa on Thursday (August 6) was attended by 30 veteran and young journalists from the country’s different media fraternity, civil society organizations, lawyers and SOLJA management.

During the meeting, veteran journalist and former BBC Somali Service anchor, Yonis Ali Nur presented an overview of the proposed Ethics Commission and the laws that govern such this commission in developed countries where freedom of expression exists.

Similarly, veteran Lawyer and legal expert Abdihakim Muhumed Abdi presented how Somaliland constitution protects the freedom of speech where press stands at the heart of freedom of expression protected by the Constitution.

In his opening remarks, Mr. Mohamoud Abdi Jama (Huuto), SOLJA chairman stated that the country’s media faces a lot of challenges in the absence of some media regulation laws.

Mr. Mohamoud also stressed the need to find an independent media ethics regulator to support members of the public and government institutions in seeking redress where they believe that the press code of conduct has been breached.

In his closing remarks, Minister of Information and National Guidance Abdilahi Mohamed Dahir “Ukuse” urged Somaliland journalists to create an atmosphere which they can pass the challenges facing them in the absence of media regulation laws.

SOLJA’s consultation meeting was sponsored by National Endowment for Democracy (NED) which is an international organization that supports freedom around the world.

Somaliland Journalist Association –SOLJA was established in 2003 with the purpose of “Defend and Promote” the rights of the media in the country.

SOLJA which aspires to ensure that the local Media realizes its capacity in executing its activities within its ethical norms hence exercise freedom of expression in a fearless atmosphere is indebted to its main sponsor the National Endowment for Democracy-NED and others for supporting its Mission of Empowering Somaliland media in its field of expertise hence safeguard its professional rights to Guarantee ethical journalist.