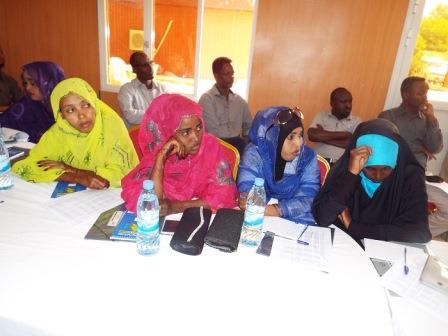 The trio female journalists Nimo Mahmud Isse, Zeinab Mohamed Abdi and Yasmin Muse Hasan are in the east African country courtesy of a partnership between the Somaliland Journalists Association-Solja and UNDP.

During the ongoing three days training workshop that runs from 13th to 15th September and targeting female journalists from both Somaliland and Somaliland reporting, news and media house management skills shall be imparted.

It is expected that upon return back home the trio shall act as trainers thence transfer the Kampala acquired knowledge to colleagues.

solja skills transfer in BorameAccording to the chairman of Solja Mahmud Abdi Jama ‘Huto’ the driving force behind his organization is to establish a fear free working environment for all journalists in the country through training, equipping and mentoring as a prelude to enhanced reporting and ethical skills.

SOLJA boss Mahmud Huto1On the ongoing trainings that shall be undertaken in all regional capitals nationwide as opposed to earlier formats in which such activities were based in only in Hargeisa the Somaliland capital a procedural shift that has been facilitated via a one year’s program that shall be implemented by Solja with funding from the FORUMSYD, SLRF (Somaliland National Association in Sweden) and Somaliland Non State Actors Forum- SONSAF