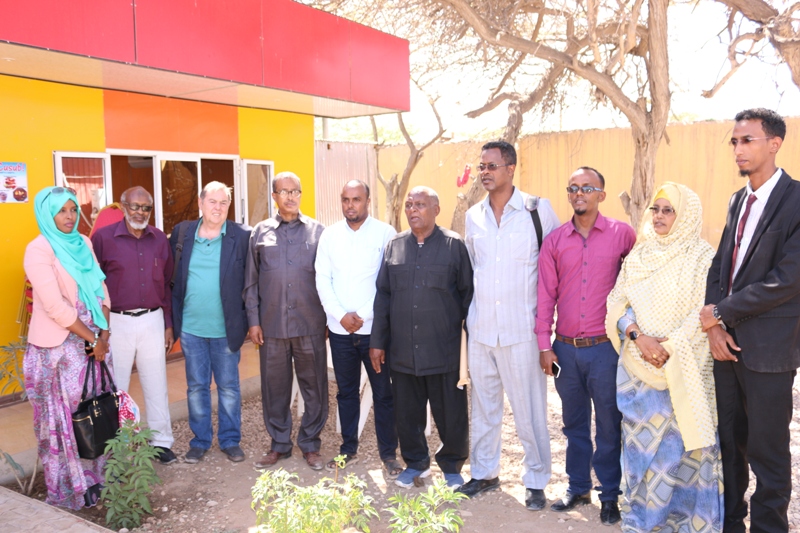 As opposed to prior elections the 2017 presidential polls saw local media houses perform devoid of any unethical acts
This was revealed by a committee appointed to monitor local media performance during the 2017 presidential elections during a meeting organized by the Somaliland Journalists Association –SOLJA in Hargeisa
To brief participants among them a representative of the national election commission –NEC were members of the media monitoring committee, SOLJA chairperson and minister of information while others representing international organizations opted to witness

SOLJA Executive Director Yahye Mohamed Abdi MadarAccording to the SOLJA Executive Director Yahye Mohamed Abdi Madar the main import of the gathering was to get a brief from the monitoring committee as well as recognize organizations that assisted in making the exercise possible
Thanking SOLJA for availing office space and relevant tools during its entire lifespan, chairman of the committee monitoring local media during the 2017 Somaliland presidential Elections, Mohamed Hasan Ali ‘Wejiye’ said that not a single media house or journalist was found to have contravened the Elections media code of conduct
The Media Code of Conduct during Presidential Elections with the aim of setting parameters guiding responsibilities of media before, pre-election, election and post-election election periods was jointly signed by SOLJA and NEC in mid September 2017

brieingStressing that the professionalism portrayed by local media houses made his committee’s work very easy Mohamed Hasan Ali ‘Wejiye’ said that it was also evident that all sectors in Somaliland have attained highest maturity in tenets of democracy.
Revealing that the complete report shall be submitted to NEC soon the veteran journalist concluded by thanking all those who made the monitoring possible.
The seven members of the media monitoring committee during 2017 presidential elections were pooled as follows
a. Two representatives nominated by Somaliland Journalists Association (SOLJA)
b. Two representatives nominated by ministry of information.
c. One representative from the women in Journalism Association (WIJA)
d. Two representatives nominated by the National Electoral Commission more so from among lawyers and intellectuals of the country
According the chairman of SOLJA Mahmud Abdi Jama “Huto” the good performance by local media houses is directly related to enhanced skills acquired during various trainings undertaken by his organization
“It is of great pride that for the first time local media houses are reported to have performed professionally during elections, that is without bias to anyone political party or candidate” said Huto

committee monitoring local media during the 2017 Somaliland presidential Elections Chairman Mohamed Hasan Ali WejiyeRevealing that the local journalists body could not have achieved anything without support, The SOLJA chair went on to thank various partner organizations like Coffey international, IMS, Free Press, NED, UNSOM and VIKES among many
“These organizations played a big part in helping achieve current success achieved by media in Somaliland be it through funding trainings, availing technical expertise and equipment supply” said Huto
In conclusion Huto who congratulated President-Elect Muse Behi Abdi on behalf of local journalists also pledged apt cooperation with the incoming administration
While the entire Somaliland fourth estate was reported to have carried-out election related reporting in a most professional manner, the state media received special commendation

from left Somaliland information minister Osman Sahardiid and SOLJA Chairperson Mahmud Abdi Jama Huto at the briefing“Contrary to expectations all branches of the state media acted professionally by availing the three parties equal coverage” said the minister of information Osman Abdilahi Sahardiid ‘Adani’
Stating that ruling Kulmiye and opposition Wadani and UCID parties had all their campaign activities given equal coverage by Radio Hargeisa, Somaliland National TV and Dawan Group of Newspapers, Minister Adani said this was made possible not only by pursuit of adhering to media conduct but courtesy of prevailing professionalism as well political impartiality
While the media code of conduct for the 2017 polls had set out general guidelines for the entire Somaliland fourth estate there were specific ones relevant to the state owned ones namely: State-owned media such as Radio Hargeisa, Somaliland National TV and Dawan Group of newspapers should be impartial to all political parties and it must provide equal platform and time to all parties during campaign period.
The Somaliland presidential elections contested by Kulmiye, Wadani and UCID parties were held the 13th November with Muse Behi of Kulmiye emerging winner with 55% followed by Abdirahman Irro of Wadani 40% and Eng Feisal Ali o UCID with 4% of the Votes cast.