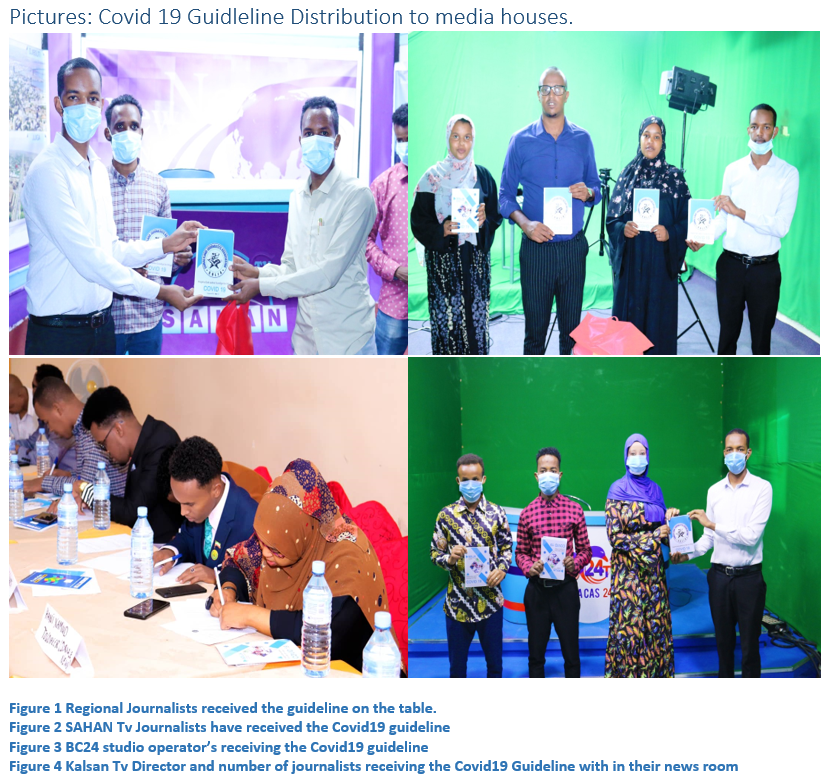 Endorsing the media houses and media practitioners needs on skill development and professional building and addressing the alarming situation of Covid19 pandemic which have hit Somaliland and the rest of the world. There are local efforts Somaliland journalists association carried out to ensure the media’s role is intervened and an ideal role for Crises reporting is achieved by equipping the practicing journalists, reporters, news anchors, bloggers and active digital media reporters engaged to contractive and effectively report emergency crises with the help of Covid19 reporting guideline which is easy to understand and context based available their news rooms.

The journalists working out the field visiting the press conferences and making interviews to face to face from the of not having proper precautionary measures and poor capacity of technological use has caused that the government officials who were positive transmit to the journalists. This has  affected the work routine of the media in general the lack of proper awareness for the society caused many journalists hide they have had been positive and caused horizontal spread among the journalists they work with.

Media responsibility for sharing proper accurate information of daily infection updates were poorly managed in social communication in comparison to the neighboring countries  which lead the negligence of the people to take the advises seriously. The guideline helped the practicing journalists to ensure their safety also avoid reporting un-certified traditional medicines, and include the health professionals to involve the discussion and use the best practices of infecting the disease, social distancing, working from home and improvement of media outlet cleanliness.  The guideline booklet was distributed to all different media houses based in the capital city and regional journalists were delivered to their regions.Finally, recent media monitoring reports carried out by SOLJA on Media’s coverage against Covid19 revealed the Health information and Covid19 reports scored the highest 80% topics screened in the Somaliland media which have had shed the light how we were socially prepared the briefings, health infrastructure and daily updates. The news stories where ethical and reflecting ethical principles including truth, independency, objective, minimized harm and challenged the stereotype about the Virus. Although, there was uncontrolled misinformation and fake news in the social media with no verification and references of health authorities. Despite this challenge, SOLJA have been convinced that the Guideline have helped to ensure media’s credibility role on the Covid19 reporting in general except the minor enrichments made by some media houses and journalists including the Eryal TV who have broadcasted a traditional scholar who claimed he got the cure for Covid19 and later on apologized.