Yahye Mohamed executive director of SOLJA has given a short briefing about the meeting and he said “Somaliland Journalists Association SOLJA organized this meeting with collaboration of the Civil Service Institute CSI and Civil Service Commission CSC for inviting of the government Communication and public relations officers and department heads”. Mr Yahye added this meeting would not being possible without the support of International Media Support IMS as they are our foremost donors for advancing media freedom and access to information in Somaliland. 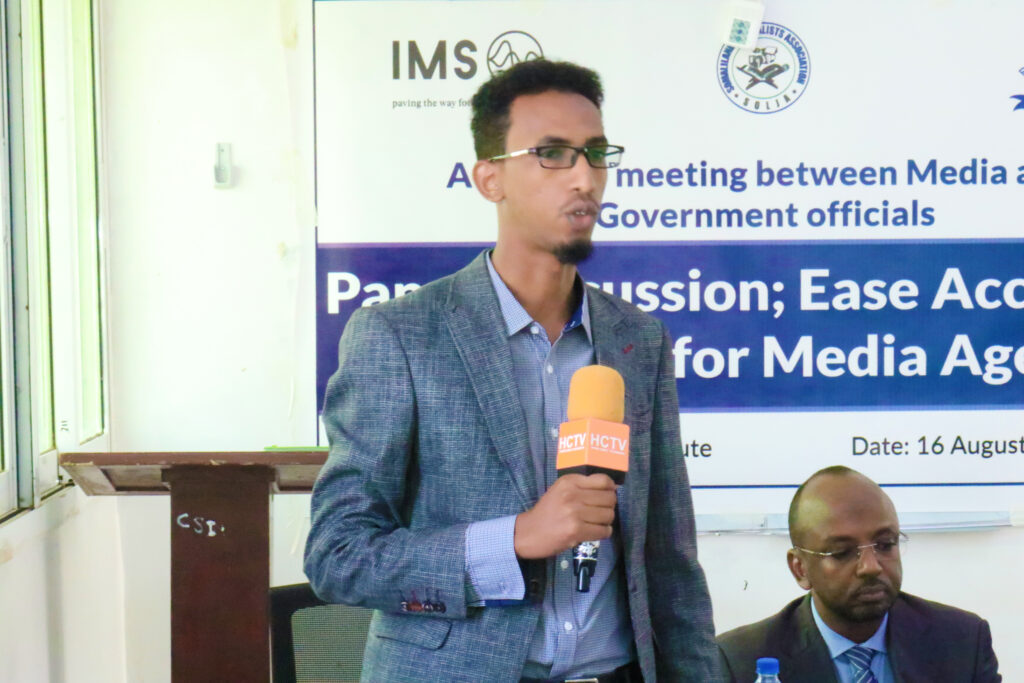 Furthermore he highlighted that most of the African countries has approved the access to information act which is nonexistent in Somaliland. The agenda would be our guide with in the meeting and the prime objective is establishing proper cooperation between the media and the government branches through improving access to information.  Also the importance of government in providing information to the media also we would mix from the input and contribution of the panelists and the final session we will make a road map of collaboration.

Mustafe deputy chairman of Civil Service Institute CSI. Took the stage and expressed his regards to the  government communication department heads for the well-timed acceptation of the invitation, he further emphasized the main objective is how the media can get an accurate information from the government institutions and the government issues and also reducing the friction it causes the time of lack of sufficient information. Mustafe finally said “We are welcoming the new collaboration with the Somaliland Journalists Association SOLJA and their efforts to ease the access to information, and it’s very important to organize these kind of meetings which would be a gateway to tackle misinformation and fake news”. 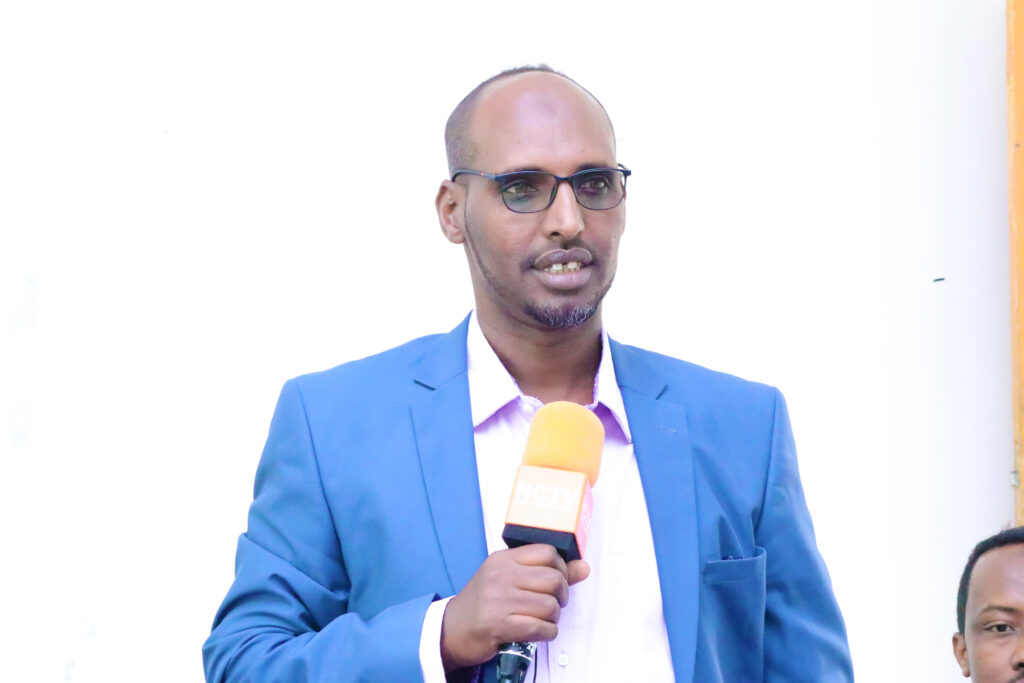 Chairman of SOLJA Mohamoud Abdi Jama took the speech and he started his remarks “these meetings are prearranged to open and to underscore the discussion of the essential need of the access to information and the right to information for the journalists, which are very necessary to the public in general and if we work together and better our communication with utmost quality in line with sustaining, the public would be informed and would be aware to the ongoing activities and how they are done which media face many challenges to find info”.

He added this advocacy meeting is broader than any other relative meetings we always have, there is a great gap between the media and the government in the perspective of data and information but today we would hear from the panel of field experts to their discussion of easing access to information from the government offices. 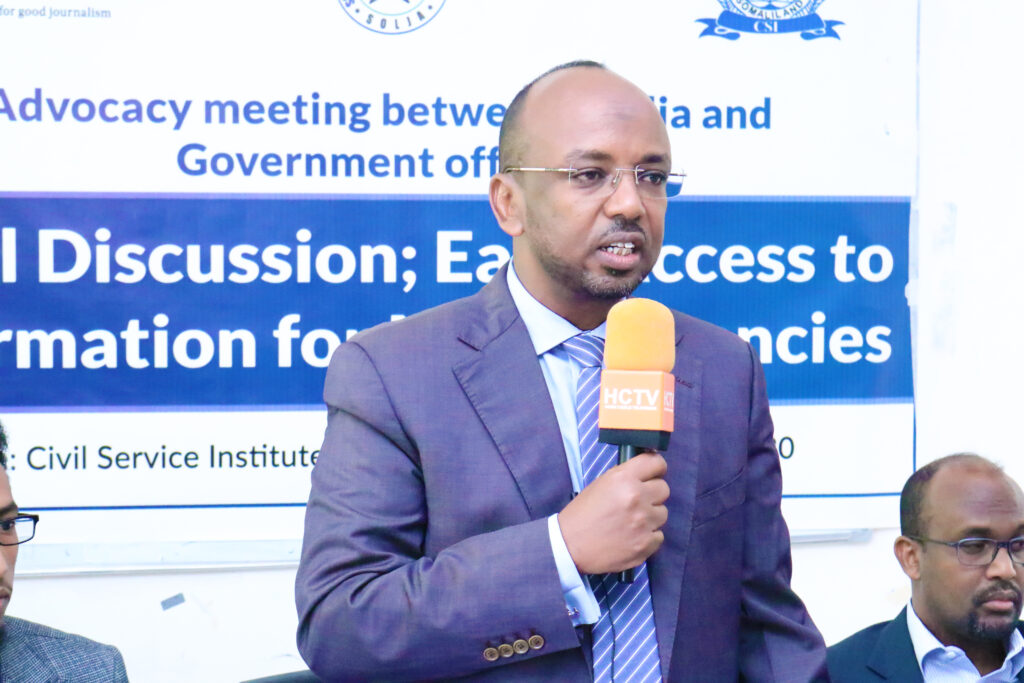 access to information from the government offices he reminded the participants that all political, cultural, community based organizations and the government are from one society and seeking any ways to establish trust among them.

Chairman Farhan says “Any time we create space for dialogue and discussion towards how can we share accurate information through the use of Information and Communication Technology ICT is when we are come closer to the good governance” He stressed the use of social media has made it easier that every person post an information to his profile and many of the audience has no skill, knowledge and experience to analyze the authenticity of the information.

Dr Abdiwali minister of telecommunication has expressed his pleasure to attend this important discussion and he said “There is a great shift of the traditional media to internet based platforms mainly the social media although it started with the websites which people read news now the due to scrolling we can see the updates from the pages and news feed of the media house profiles with in the social media” talking about the social media he added “There is a change of how to receive the information from a research perspective had shown that 40% of the people check their social media accounts before sleep, that is why the internet based apps are professionalizing the usage analysis of the apps. This has given that every one of the public could be a journalist using the social media tools” 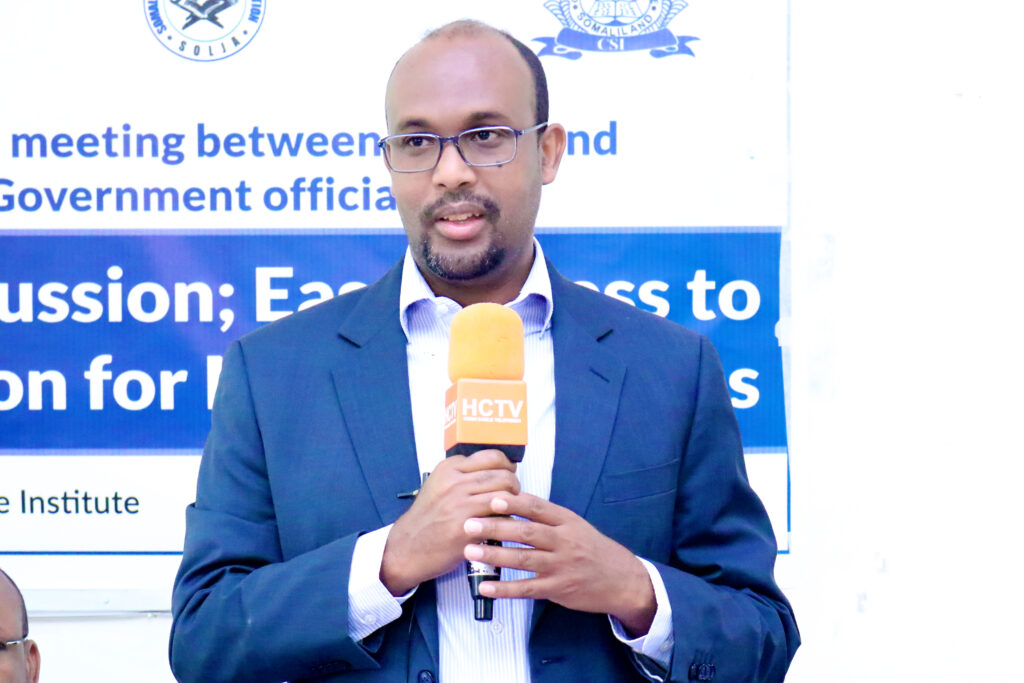 Dr Abdiwali emphasized the objective for the meeting which is how to ease the access to information which we do need to learn such as responsiveness of the institutional pages we manage, sometimes we share the updates to the public, when they raise queries we don’t respond to them and the engagement with them is also very low. The society have their own concerns suggestion and comments which are very important to us”. The government branches has limited websites and verified social media accounts. There is a misunderstanding that the journalists are targeting the ministers and the heads of the government offices rather than they can access the communication and public relation offices. Most of news outlets the information they are seeking is news but there are many forms that people can and get information include interviews.

The minister highlighted that the information is the public asset that deserves to be returned to the public and the media should follow and investigate the gaps and weaknesses of the government activities in a constructive manner. As a ministry we were working on the e-government project and there is a big component which is an open data such as the ongoing activities and the completed projects updates and documents to be shared there.

It’s an important with in the democracy that the public should be informed and updated what are the services the branches of the government are offering? How did they accomplished the plans? Where the funds and the government budget gone? The criticism of the government is that they don’t document tangible statistics for the last 2-3 Years, and we are working on the open data initiative and we are open to the media. There are a lot of activities that you are doing and the public are not aware about it, there are remarkable reforms with in the government and how to deal with the data.  The information we are giving and publishing information/ content/ documents to different online platforms the audience has an equal chance of accessing these contents we should consider the meaning of the messages we are sharing with the audience.

The structure which our institutions and the government offices in the media perspective is not well designed, on the international standards every ministry and institution has a press office responsible for the media. Which brings information from the media and a gateway for distribution and information sharing. We don’t have that structure at all.

That press office receives your inquiry and connects you to the responsible person who is in judge for the area you want to get information from it. And if they have already have an information prepared that can be shared with the press the office sends to you.

The second mismanagement of the institutional structure is the police, which are given authority greater than theirs, some ministries he is at the gate you may have an appointment with the minister or through his secretary at 10:00 AM, the soldier is on the gate which denies to you to enter without phone call from the minister to the soldier for entry approval. The police role is the security and he inspects you only and then he guides to the office you have an appointment with.

All the army have in-depth hate against media and the journalists, I would like to share with you one of the practical stories that happened to me one day we have a meeting with the minister and I went the meeting a minutes ago, standing in the waiting area a soldier approached to me and said told me they have hatred for these camera’s and I told that I hate the gun he was equipped to, he amazingly questioned my response and said we defend the country by this gun and I shortly expressed every person defends the country by what he have. We don’t have to hate us but to collaborate eliminating that kind of hate among us. Most of the stakeholders put many resources to training the media but it’s now the time to glance on the police and train them the basic human rights. Our police are not trained how to deal with the media and the journalism work. There are certain specific procedures to treat the media, for example they are trained how to deal with the protests and usage on anti-protest weapons within that framework police need more sessions to understand the work of the journalists and media stakeholders should focus on that.

The third mismanagement is from the media and the journalists who are seeking information are not designed in the manner of the journalist, he is not properly dressed don’t have ID or Camera which make violence when they reach at the gate of the institution, they are structured in professional manner which is always taught the basics of the journalism from the universities.

In Conclusion  I would like to remind there should be measurements put in place strategically, as you may know the white house of the United States every media professional does not enter it. All the media houses has their white house correspondent which is registered from the white house he was given a card and he is also known for the profession and the security wise of the government perspective.

Hassan Heis: Communication Expert for more than 20 + Years of experience, Journalist and founder of Golden Institute. 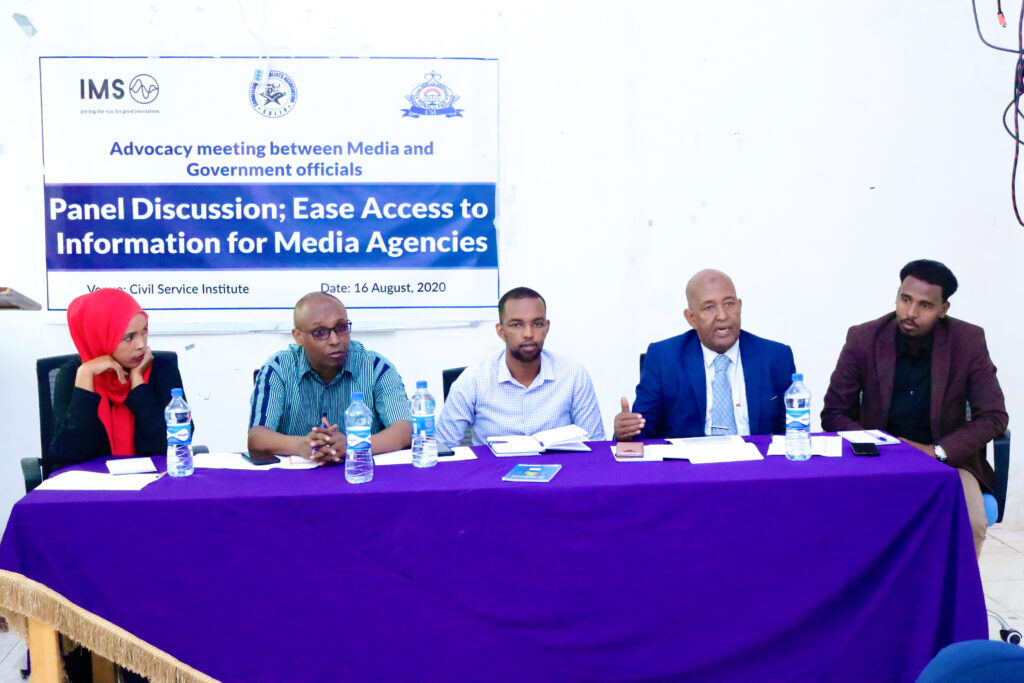 The composition of the participants is taking all the message from you, together there are Journalists and public relations officers of the ministries and the most important government institutions.  Public relations are mainly added and the Media and abbreviated PR & Media. We were talking how to get information and it was the theme of our meeting, the first step we have today, the head offices that are in the meeting are the top ones for the sources information within the government offices.

There two ways outsiders find an information one is court ordered investigation which warrant has been issued to the information provider which case has been filed. The second is like ours those of journalists who are looking for truthful information from the right source to the community.

The challenge that journalists hold the sixth question in the pocket! Do you know what I do mean? This is the way you can reach your target interviewee is very incongruous, which has caused the journalists to  run after ministers, deputy ministers and Director Generals as they are the decision makers, which is the role of the PR& Media offices is not in place. As you are aware these political officials were appointed and sooner or later they will leave the office so we must the focus to the middle level officials such as the departmental directors and etc.

It’s obligatory to every journalist to have a book for his contacts such as the titles, emails, and telephones. If you couldn’t access to the interviewee’s telephone you have to send him an email for what you wanted from the official.  Mr Hassan urged the communication government officials to ensure the system of information sharing to the compatible channels 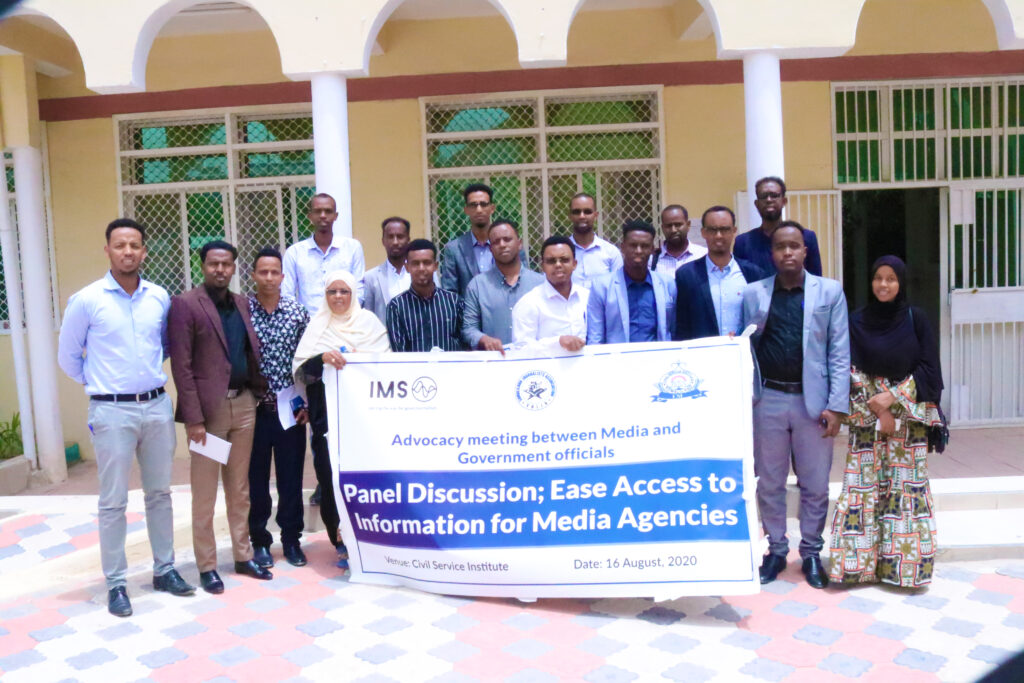 There should be put in place a law which governs the media, and police is trained well, when they see a journalist they are afraid of the media and we as journalists have the fear that he can harm you or your property. If we don’t focus on the laws we will talk about these challenges on every time. 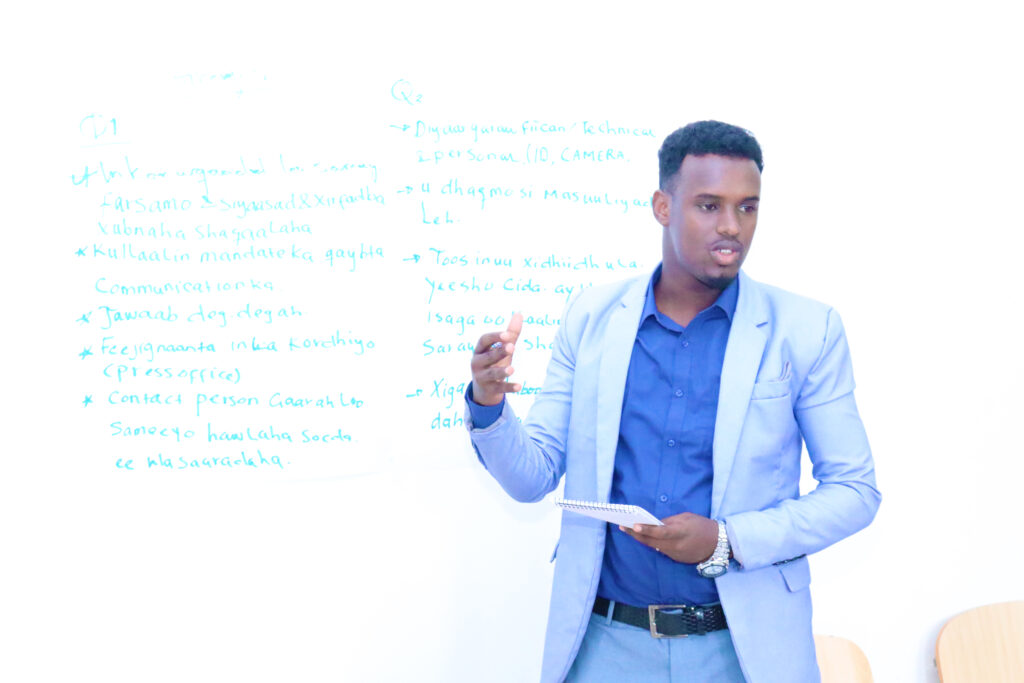