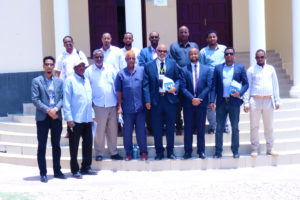 the Somaliland Journalists Association had organized a huge meeting attended by 5 parliament members from the Social affairs committee, the legal and religious consultants, and the vice-chairman for the general secretary of Somaliland parliamentary.
Firstly, the Somaliland journalists Association has opened by welcoming the participants of this valuable meeting and thanked the attendance of the social affairs committee showing their commitment. The chairman Mohamud Abdi Jama stated the landmark milestone a couple of months before about Early July that SOLJA has submitted the Draft media bill to the Chairman of the house of representative that has later included the Media law to the 43rd Agenda and facilitated this committee to proceed to support the process of advocating for media law approvals.
Secondly, the Vice-chairman for Social affairs committee Hon. Abdirahman Mohamed Jama ‘Xoog’ has immensely welcomed the to see the drafted media bill have finally reached the parliamentary from Somaliland journalists association. Abdirahman said “On behalf of the Social affairs committee for Somaliland parliament, we have thoroughly accepted this devoted media bill and we consider for review and will carry out the necessary actions to see a free media which is responsible” he also underscored that they will make wide consultation with the various sub-committees of the parliament, the legal experts and the general assembly of the parliament.
On top of that, Prof Mohamud Husein Farah who was among the legal experts drafted the Somaliland media bill have presented the historic overview of the bill, the need for legal reform, and most importantly the crucial components of the media bill in respect to the old Press law 27/2004 which needs massive amendments.
Finally, the members of the parliament have raised their suggestions and comments and agreed on the way forward where the parliament takes the lead to review this draft bill and incorporate their ideas and in cooperation with SOLJA will jointly advocate for approvals and Somaliland media freedom is well-protected in Comprehensive media law.
Previous Post
Next Post